Taco Bell customer accused of causing $1,500 in damage with wheelchair 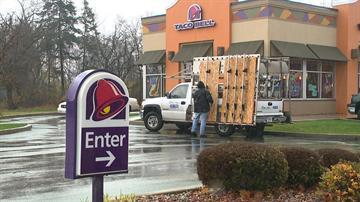 ELKHART, Ind. – A late night food run turned into a bizarre incident at the Taco Bell on Cassopolis Street early Sunday morning.  Elkhart Police were called to the restaurant around 1:30 a.m. and found the front door shattered.

Employees said that 26-year-old Amber Harvey, who lives nearby, had attempted to go through the drive thru lane in her motorized wheelchair.

According to the police report, the employees refused to serve Harvey because company policy doesn’t allow service in the drive thru to anyone not in a vehicle.

Harvey told police that she became angry about not being served and drove her chair around to the front of the building and rammed into the door, shattering the glass.

“You have to hit it pretty hard, it’s tempered glass,” explained Jim Sumption of Action Glass Company, who repaired the door on Monday.  “But, if you hit it just right it will shatter and fall to the ground…the corner of it (the wheelchair) or something hard hit it.”

When police initially arrived on scene Harvey was nowhere to be found.  They eventually tracked her to the Chicago Grill and Bar across the street.  She had a cut on her hand, but refused medical treatment.  Police charged her with criminal mischief, but she was not arrested.

Jim Sumption told ABC57 that, in his 16-years of repairing glass, he’s seen many bizarre explanations for damage, but nothing like the story around this incident.

Sumption estimated that his repairs would cost up to $325, the police report estimated total damage at around $1,500.