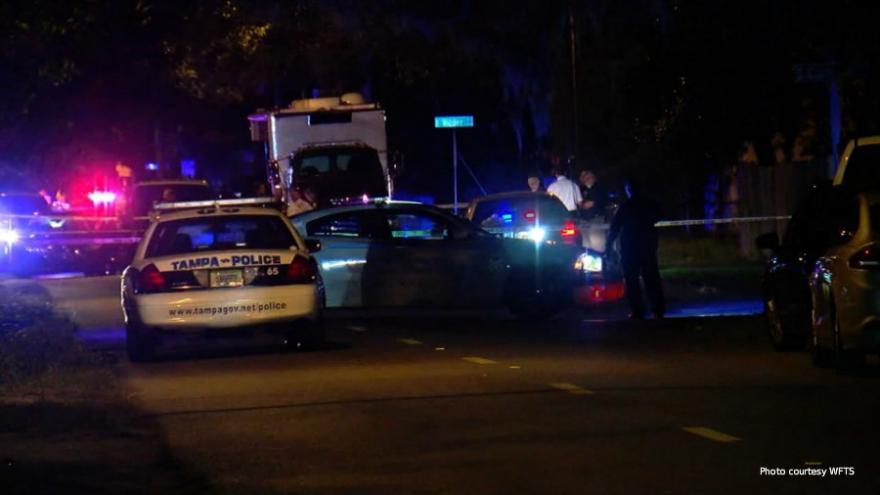 (CNN) -- A 60-year-old man was shot and killed Tuesday morning in Tampa's Seminole Heights area, the fourth such death in what police say is a string of unsolved killings in that neighborhood within the past month.

Ronald Felton was shot in the back just before 5 a.m., police said. He was crossing the street to a church where he regularly helped feed the homeless, his relatives told CNN affiliate WFLA.

Reginald Felton, his twin brother, said he urged Ronald not to go into the neighborhood at that time of day because of the other killings.

"I talked to him, but he got his own way, he still (goes) out at that time of the morning," he said.

Their sister said the whole family is shattered by the slaying.

"I've been watching the serial killer news and watching, listening, praying -- and for that to happen to my brother, to be shot four times at close range, that's hard," Linda Cunningham said.

Search for the killer

Police and FBI agents searched the neighborhood for the suspect, but made no arrests.

"It is all in the probably 10-block, 15-block area," Mayor Bob Buckhorn told CNN sister network HLN. "And so we're just going to do our good police work and hopefully get a break."

A witness provided a description of the suspect, police Chief Brian Dugan said. "When I spoke to her, she said if our officer had been five seconds earlier, he would have been able to stop it," he said.

Dugan described the suspect as a black male between 6 feet and 6 feet 2 inches with a thin build and a light complexion. He was wearing all black and a black baseball cap and armed with a large black pistol, police said. Police said they believe the suspect also lives in the same neighborhood as the shootings.

The killings have vexed investigators, who remain desperate for clues.

Last month, police said that three seemingly random killings within 11 days in Seminole Heights were all linked. Benjamin Mitchell, 22, was shot and killed in front of his home October 9. Monica Hoffa, 32, was killed October 11. A city employee found her body two days afterward in a vacant parking lot half a mile from where Mitchell died.

Anthony Naiboa, an autistic 20-year-old who had just graduated from high school, became the third victim when he accidentally got on the wrong bus and ended up in the neighborhood by mistake, police said.

"He was an outgoing person, everyone loves him," he said.

These three victims were all alone at the time of their deaths and were found within about a half-mile of each other.

'A neighborhood that's been held hostage'

Since the killings began, police have swarmed the neighborhood, stopped residents for questioning and warned them not to walk alone at night. The mayor said the city had cut undergrowth, cleared alleys and added street lights to the area.

In late October, officials released grainy video of a person running near the scene of Mitchell's killing in hopes of getting witnesses to come forward.

The lack of clues in the case has frustrated officials.

"It's infuriating. We have a neighborhood that's been held hostage. We have good folks living in this community that are scared to death," Buckhorn said. "We've been in here for the last month. You couldn't go 100 yards without being stopped by an officer."

Dugan asked residents to check on their own firearms to see whether any weapons have gone missing.

"If you own a gun and it's in your home, I want you to go to your gun and find out if it's still there," he said. "Verify it's where it's supposed to be, and if it's not, we need you to call us."

Dugan said on Tuesday afternoon that this latest killing was a little "bolder" than the previous ones, as it took place on a major street that was well-lit. Police searched yards, sheds and crawl spaces, but did not find the suspect, leaving police in a bit of a "stalemate," Dugan said.

Last month, officials said they were not calling the suspect a serial killer.

"We're not using the word 'serial killer' yet because we just don't have enough evidence," Buckhorn said. "We're not afraid of that word -- if we think that that's true, we'll be happy to say it. But we've got to connect the dots."