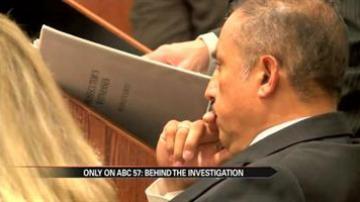 MICHIGAN -- Just after 5:00 p.m. on a warm  Friday afternoon in September, the Cass County courtroom where the Keith Lintz trail was held erupted with emotion. In the middle of it all, lead investigator Fabian Suarez felt a weight lift off of his shoulders.

It was about one year ago when Keith Lintz was arrested for the murders of John and Carolyn Tarwacki.

Suarez has invested 3-years of his life to bring the killer to justice.

"It felt like it was the first time that I could exhale in those three years,” said Suarez.

Suarez worked tirelessly on a double homicide investigation that confused and shocked Michiana.

"John and Carolyn Tarwacki, there was no reason that their lives should have been taken that day,” said Suarez. "Unless you've been through one of these investigations, you have no idea what it's like to have this hanging over your head."

An unusually long and difficult three-year investigation took its toll.

“It's frustrating because to this day there are people out there who knew about it, and won't come forward,” said Suarez.

Eight months after the murders, Suarez caught a break. Suarez got a tip that Lintz had savagely beaten a woman in Tennessee, and talked about the murders.

"This is our guy; now we're on him and we have to stay on him, and start finding out where he's been and what he's been doing,” said Suarez.

Suarez and Assistant Investigator Jason Bailey, who was brought in to help, spent two more years building a case against Lintz with no physical evidence. During this time detective Suarez made a promise to the Tarwacki's family; that he would never give up.