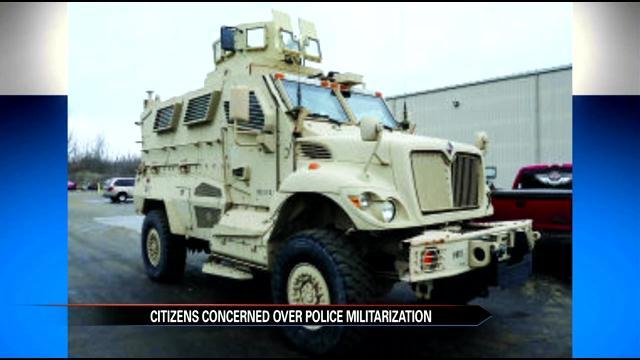 Several concerned citizens are upset over what they're claiming is the militarization of the Berrien County Sheriff's Department.

Cheryl Marie said, “It's all about militarization. This mindset that we're going to do it anyway and we have the right to do it. Just because we are taking care of your safety.”

Barbed wire surrounding a shooting range in Coloma Township and an MRAP in Benton Harbor are just two of the images that Marie said makes her feel like she's in a war zone.

Marie said, “The same thing is happening around the country. People are saying we are not going to put a band aid on this matter anymore regarding the militarization, we want economic change.”

Marie wrote a document to the board of commissioners requesting a tax exemption to be made for citizens who don't support the county's use of military style weaponry.

Sheriff Paul Bailey said the possession of these tools are a matter of public safety.

Marie said, "Militarizing the sheriff's department is absolutely absurd. We have one military vehicle, an MRAP, that we got through a program.”

Bailey said he needs a shooting range to train his officers.

Sheriff Bailey said, "Remember we are the only county in the United States that's affected by two nuclear plants so our threat risk assessment is higher than most other counties.”

He said the MRAP is for safety not for intimidation.

Bailey said, "If there's a shooter in a school over here, and we need to get deputies up there and they're shooting out, we need a vehicle to be able to get up there and get inside without losing personnel.”