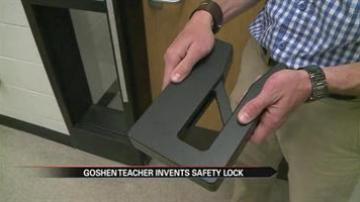 After tragedies like the shootings at Sandy Hook and Columbine school safety has been a hot-button issue. Parents and politicians all across the country are debating how best to keep students safe a Goshen teacher's patent and invention may just be the solution.

Like many Americans, Darin Holsopple watched in horror as the tragedy in Sandy Hook unfolded.

But as a teacher, the issue hit closer to his heart.

"When the parents send them here, we are responsible for them. I knew that there was a gap between what needed to be and what was," said Hosopple.

He invented a special lock to keep the bad guys out. It disables the door handle, but keeps the lock intact allowing emergency responders to enter with a key.

"A huge advantage safety wise because it will still allow authorized personnel to enter the room," said Hosopple.

Holsopple spent the last year testing the device and making sure it meets the state's fire codes.

After getting approval from officials, he pitched the idea to a school safety training program. He secured a licensing deal just two months ago.

"Completely marketed, manufactured and distributed by the ALICE Training Institute out of Ohio," said Holsopple.

The company is working to put them in schools all across the country.

That has this math teacher excited. And he has a lesson to share.

"Nothing worth having is ever easy. Continue to chase your dreams, and continue to live your life in a great way," said Holsopple.

So far, the devices have been adopted in two area schools. The distributor is working to market them elsewhere. Holsopple says he'll know how many have been sold in the coming months.