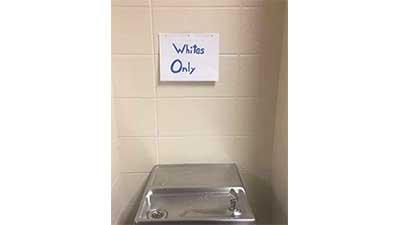 The teacher who was placed on paid administrative leave after instructing students to place "whites only" and "blacks only" signs near the bathrooms and drinking fountains at Concord High School has returned to the classroom.

The teacher was attempting to teach the students about segregation, according to a press release from Concord Community Schools Superintendent John Trout.

According to Trout, the teacher did not receive prior approval from school administrators before beginning the lesson.

"High school teachers across the United States use similar instruction techniques; however, prior school administration approval is obtained, intensive, advance instruction to students and parents is offered and division of the students is based on characteristics other than race, such as a student eye or hair color, birthdate, height or the number of letters in the student’s name," Trout wrote in the press release.

Superintendent Trout says the incident was investigated and it was determined the teacher did not act maliciously or intend to discriminate or harass anyone.

The teacher offered a written apology to students and staff who were offended and will participate in a diversity awareness program, Trout said.

The teacher returned to the classroom on January 4.