Teachers rushing to get ISTEP testing done before deadline 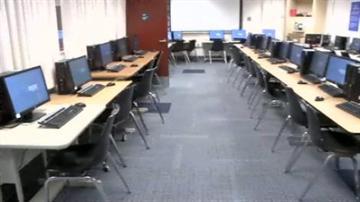 MISHAWAKA, Ind. -- The problems with ISTEP testing seem to be fixed, but now schools are under pressure to complete testing before the deadline.

There are certain guidelines schools have to follow with the ISTEP. All students have to finish one section of the test before they can go on to the next!

That can be tough to plan for in a normal year, but it’s more difficult when everything changes at the last minute. Earlier this week, the state had issues with connecting all of the students to the system for testing. So only half of the students could take the test at one time.

Trying to coordinate the testing of a thousand kids is no easy task for a school principal, so they approach it well in advance.

At Schmucker Middle School, a Penn Harris Madison school, Principal Janet Scott planned it all out with the help of her lab coordinator and a counselor.

"We've probably had our schedule set for about a month now, going into the testing,” said Scott.

That schedule went out the window shortly after testing started Monday.

"We've had four different changes, as my lab coordinator said, 'Our 27th schedule for testing,' because that's really what it feels like; is that we continue to have to modify and change,” said Scott.

They have fallen behind.

"Yesterday we just finished the first round of tests when we really should have been done with day 2,” said Scott.

One of the hardest things they're faced with now is juggling which kids need to be testing, so that everyone can finish before the deadline.

"We are actually going to have to use all three of those extra days that the state has given us, just to get through with the testing and make-ups,” said Scott.

With everything so up in the air, students and teachers need to be ready for anything.

Kids who thought they would be taking the test on a particular day, may not be after all.

"There is some stress to the students because they know it's a high stakes test. They want to do well on it, and so it's difficult to have to keep juggling that,” said Scott.

Because of all of the problems earlier this week, students will have to take tests on Friday, something they were not originally planning to do.