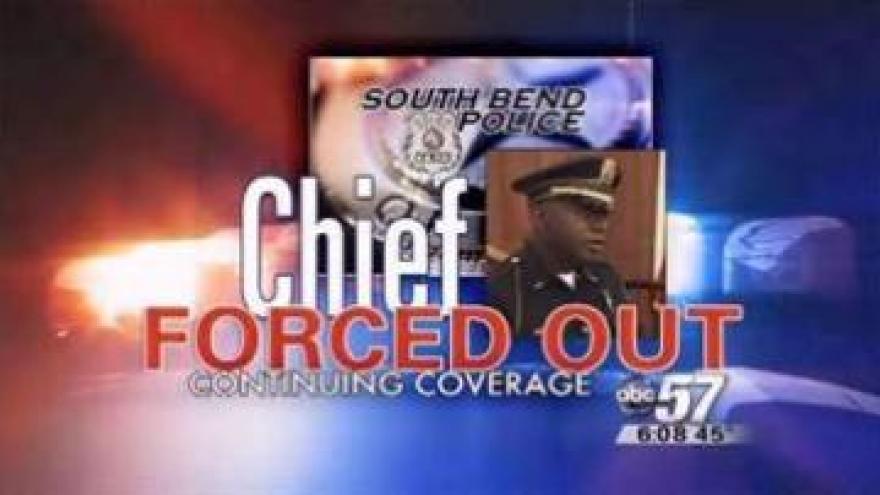 SOUTH BEND, Ind. -- On Friday, South Bend's Police Chief tried to rescind his resignation, but the mayor said forget it.

At 7 p.m. on Thursday, we were the first to tell you Police Chief Darryl Boykins had offered up his resignation.

At this hour, there is a new chief at the helm of the department. The mayor says he relieved Boykins of his duties as chief as of 5 p.m. on Friday and demoted him to captain.

We have ABC57 team coverage on this story.

Jaclyn Kelley will break down the investigation that led to the chief's forced resignation.

We start with Ryan Klund who was at a rally for Boykins at the Martin Luther King Center on Friday afternoon.

Here’s a look at what he found out from Boykins.

At a rally Friday afternoon, Boykins said he did nothing wrong and announced that he sent a  letter to South Bend Mayor Pete Buttigieg’s office taking back Thursday’s resignation.

“I have decided that it would be wrong for me to resign as Chief, given that I have done nothing wrong,” the letter stated.

"I asked ‘why me?’" said Boykins. “The things they're accusing me of have been going on in the police station for a while, no different than any other chief that's been around.”

Neither Boykins nor his lawyer Thomas Dickson would answer specific questions about the FBI investigation or Boykins’ actions leading to the investigation.

“It’s our understanding that there is a continuing investigation and I think under those circumstances we need to say there are questions we cannot answer,” said Dickson.

Former SBPD Public Information Officer John Williams told ABC 57 News that recording telephone conversations within the department has always happened. “All the phone lines that come into that police station are recorded,” he said.

Williams, who retired five years ago, said every officer employed at the department has known their conversations were recorded. “They know all those lines are taped,” he said.

“I’m going to fight hard to keep my job and I’m going to continue to do that,” said Boykins.

Despite Boykins’ letter to Buttigieg, the Mayor’s office told ABC57 News Boykins was relieved from his duties as chief effective 5 p.m. on Friday.

On Friday, Chuck Hurley was sworn in as the interim chief of police for the South Bend Police Department. As a result, Hurley is taking a leave of absence from his current position as the Chief Deputy Coroner.

Mayor Buttigieg said this decision did not come easily, but that he was forced to take action after learning of the federal investigation, "I was notified through federal authorities that information came into the office."

Information the mayor said did not sit well with him. "I was not happy. We have a police department that is trusted to have the highest degree of competence, professionalism and integrity," said Buttigieg.

Earlier on Friday, ABC57 News asked if Boykins was forced to resign and the mayor had said it was Boykins' decision. However, the statement contradicted at least two other statements made by the mayor on Friday.

"I know enough to know that we needed to make changes, and by making changes I can put the department in a position that I am sure will make it compliant from now on," said Buttigieg.

"Changes were needed. We had to make those changes to fix the problem so they don't happen again," Buttigieg said later.

Still, the mayor said more changes will come as time goes on and more information is released about the investigation. "I can't speak to that because changes are still ongoing, but I can say that there are both procedural and personnel changes involved," he said.

Speculation around what other personnel changes will be made comes after sources close to the police department told ABC57 News that the federal investigation was sparked after an employee found a recording between a South Bend Police detective and a Metro Homicide investigator. The recorded conversation is said to be filled with racial slurs directed at former Chief Boykins.

These are allegations that the mayor refused to address when asked about it during Friday's news conference. "I can't speak to that. I haven't heard any recordings. My best understanding is that it would be a violation to even listen to any recordings made improperly," said Buttigieg.

The mayor's office said they are still waiting on more of the investigation's findings to be released before making a decision on if and when more personnel changes will be made.

These latest developments still leave some very big questions unanswered. ABC57 News will continue to work to answer these questions for you: