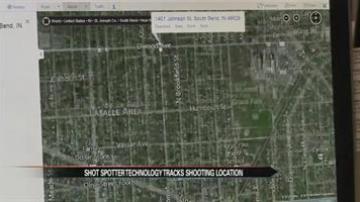 SOUTH BEND, Ind. -- South Bend Police responded to an alert from their ShotSpotter program that shots were fired in the area of Johnson Street Wednesday night. When police arrived, they located a suspect and he was quickly arrested.

Sensors for the ShotSpotter program are hidden throughout the west side of town.

When one detects gunshots, it sends alerts to every laptop in every squad car.

The sensors were installed about a month ago and police say the program, so far, has been a game changer.

Debbie Sallee has lived on the city's west side for 30 years and says for the first time, in a long time, she's breathing a sigh of relief.

"I don't think we have to worry as much because now the police can be there immediately," said Sallee.

Police said no one called 9-1-1 when the shots were fired on Johnson Street Wednesday night.

"The only call we received was from the hospital when we had a walk in shooting victim," said Captain Phil Trent of the South Bend Police Department.

By the time police got that call, they already had the alleged shooter, Tony Anthony, in custody.

Officers rushed over to the area, pulled into an alley and found the suspect with a gun.

At first, everyone had doubts, but now they say the program is proving to be invaluable.

"At first I was leery about it. Now I'm really happy with it. It's awesome how they can immediately respond. They can be there within seconds," said Sallee.

"Everybody around here was skeptical because its like how good could this possibly be? It's really, really good," said Trent.

This sensors cost the city over $200,000. In a couple years the city will have to talk about how to fund them if they want to keep them around.