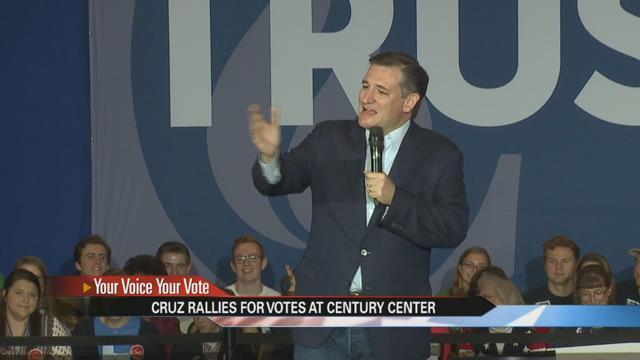 Michiana is in the national spotlight as presidential hopeful Ted Cruz held a rally on Thursday at South Bend’s Century Center.

With the GOP nomination on the line the senator pulled no punches when it came to convincing the crowd his opponents should not receive Hoosiers’ support.

“The choice could not be clearer between Carly and me on one side and Donald and Hillary on the other,” said Cruz.

“Donald Trump and Hillary Clinton are not going to fight the system, they are the system,” said Fiorina.

Noticeably missing from his speech was opponent John Kasich after Kasich agreed to focus on Oregon while Cruz campaigned in the Hoosier state.

With just a few days until the primary, many of the one thousand people in attendance were supporters. However, some are still undecided.

Trump supporter Logan Foster says Cruz had a big impression on him at the rally.

“We don’t cast our ballot until Tuesday so I’m still at a point where Ted could win my vote,” said Foster.

A group of Bernie Sanders supporters protested across the street.

“As people were coming out of the meeting with Mr. Cruz we were able to engage several people and I think many of them are open minded,” said Sander’s supporter Cathy Liggett.

Trump and Sanders have upcoming rallies at the Century Center. Sanders’ will be Sunday at 4 p.m. and Trump’s is planned for Monday at 7.