Teen could get life for killing grandmother 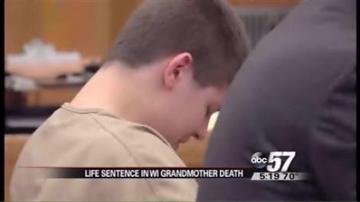 SHEBOYGAN COUNTY, Wis. -- A Wisconsin teenager convicted of killing his great-grandma may spend the rest of his life in prison.

The 14-year-old pleaded no contest to first degree murder.

Police say last year, he and a friend broke into his great-grandmother's home to rob her. That robbery turned violent and they ended up killing her with a hatchet.

The teen was so upset he could not finish reading his statement, so his lawyer read it for him.

"Even now, when I think back, I have no idea how I was able to commit such a crime like this, that I was able to do such an extreme crime, especially with how violent it was," said attorney George Limebeck. "I am sorry. I do wish I could take it back."

The teenager's family asked the judge for leniency, blaming a head injury for his actions.

He will be eligible for parole in 35 years. The other teen involved will be sentenced later this week.