Teen dies, nine injured in crash on I-70 near Indianapolis 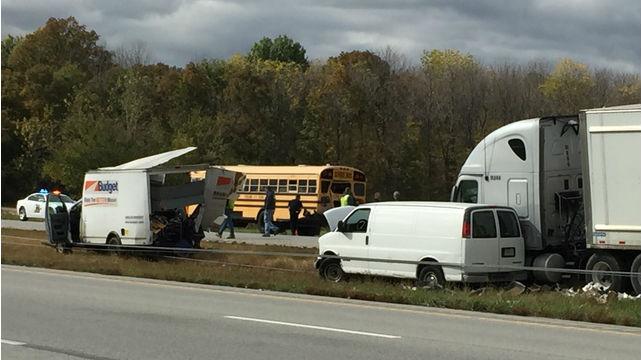 One person died and nine people were injured during a four-vehicle crash on I-70 just outside of Indianapolis Friday afternoon.

The westbound lanes of I-70 in Hendricks County were shut down near State Road 39 around 12:49 p.m.

Our ABC affiliate, RTV6 in Indianapolis, says the accident involved a Missouri school bus leaving the FFA conference in downtown Indianapolis. The 23 students on the bus were from Stoutland and Richland schools. Five adults were also on board.

Sergeant Joe Watts with Indiana State Police said the injuries were not life-threatening.

Police also said seven of the nine people injured were children on the school bus, whom were transported to the hospital. The fatality was not on the bus, police confirmed.

The accident also involved and white van and a father and son traveling in a Budget rental truck. Watts said when the Budget truck began to slow down due to construction, they were rear ended by a semi truck causing them to hit the back of the school bus.

The 19-year-old son, who was the passenger in the Budget truck, was killed. Police said the two were headed home to Utah.

The semi then veered to the left, forcing a white van into the median.