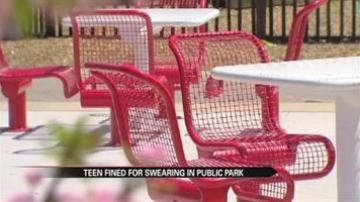 A Michigan teen was fined by the police for his poor choice of words.

Colin Andersen was fined $200 for disorderly conduct after he cursed in front of a police officer near a public park.

Andersen and his friends were skateboarding at the park, which is not allowed.

After his friend was ticketed for skating, he dropped a few 4-letter words and wound up with his own ticket.

"It's a violation of the city ordinance for language or conduct that causes a breach of the peace," said Brighton Police Chief Tom Wightman.

"I have morals, I mean, I'm not going to swear in front of little kids, that's not the kind of person I am, it's just that I happened to be in the wrong place at the wrong time, I guess," said Andersen.

Police say they can enforce the law because it is not an issue of free speech.

Andersen tried fighting his ticket in court but lost.

He has until the end of the month to pay up that balance.