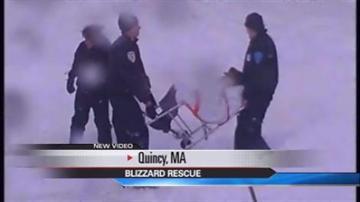 QUINCY, Mass. -- As the snow continues to pile on in New England, one Massachusetts teenager initiated the frantic rescue of his 103-year-old neighbor.

The teen was shoveling snow when he thought to check on his neighbor after the power went out.  He found the woman shivering in the dark and realized she might have hypothermia.

Because the phones were down all they could do was frantically shovel her drive-way to clear a path for EMTs but the teen said his neighbor put up a fight.

"She's a little bit stubborn. I know I shouldn't say that, but she doesn't like accepting help," said Dylan Pereira.

After being treated at the hospital the 103-year-old woman is back home recuperating.