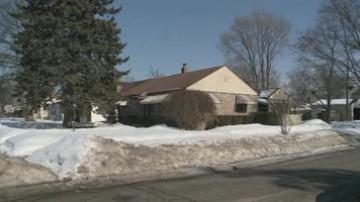 The girl's mother did not want her identity revealed for her safety.

She said she is glad to be safe but is still shaken up by Thursday night's incident.

"I heard the dogs barking so I came out and this guy was just standing there right in front of the kitchen and the living room," the girl said.

The victim says the man got into their house Through a crack under the garage door, which was ajar because of the thick layer of ice between the door and the ground.

"As soon as he saw me he ran back out into the garage again."

She says when she saw him, she froze - terrified of what might happen next.

She says her first thought was that she was going to die.

She also thought he had a weapon.

"His hands were in his pockets so that's why I thought he had a gun or something."

By the time police arrived, they were unable to locate the suspect.

The victim says she hopes this serves as a reminder to take precautions to prevent burglaries.

"Make sure you lock yours doors and make sure your garage doors are shut."

If you have any information on this crime, contact the South Bend Police Department.