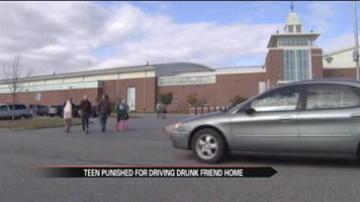 NORTH ANDOVER, Mass. -- A Massachusetts high school teenager is getting a harsh punishment for being a designated driver.

Two weeks ago, Erin Cox received a call from a friend who was too drunk to drive home from a party.

When she went to pick her up, the cops busted several kids for underage drinking.

She was cleared by police but later demoted from captain of the volleyball team and suspended for violating the schools zero-tolerance drug and alcohol policy.

"If a kid asks for help from a friend, you don't want that kid to say 'I'm sorry I can't help you. I might end up in trouble at school,'" said Cox family attorney Wendy Murphy.

Her parents filed a lawsuit against the district late last week.

In the meantime supporters have started a petition to let her play volleyball again.