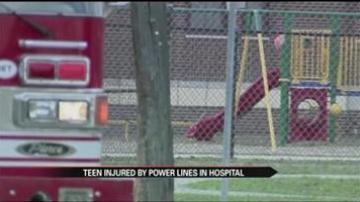 DETROIT -- A 14-year-old Detroit boy is in critical condition after suffering an electric shock from a downed powerline Monday.

Police say the teen and three others were walking to school when he picked up the live wire sending him into convulsions.

A 10-year-old grabbed a stick to free the teen of that powerline wire, locked in his grip. That is when the school's principal came running, ignoring warnings not to touch the boy.

"I said 'No, that's my baby, I'm going to get him.' So my assistant principal and I - I pulled him from under the wire and then I immediately began CPR," said Principal Dwayne Richardson.

The wires were knocked down by strong storms that blew through the area on Sunday.

Detroit's energy company DTE is investigating why the power lines were exposed and unprotected.