Teen steals $8 from church, gets 2 years in jail 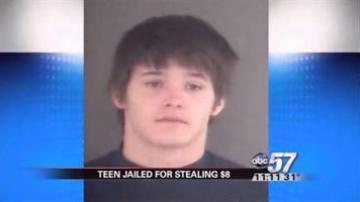 KOSCIUSKO COUNTY, Ind. – 19-year-old Lucas Howland was sentenced to two years in jail for stealing $8 from a church.

“That’s right,” Stephen Leininger said, “Well the thing is, hurting people do crazy things and I completely understand.” The pastor of the Milford Christian Church said he’s forgiven Howland, “My policy and the scriptures policy is to forgive someone as soon as the crime takes place.”

But Leininger said that doesn’t mean that the teen should not be punished,“It’s a huge challenge,” Leininger said of the sentence, “But when there is no consequences for actions people take no responsibility.”

Still, the pastor is not sure if this punishment fits the crime, “I don’t know,” Leininger said, “I really struggle with that, because like I said, people do crazy things.”

On the first Sunday in September, Leininger walked into his church to find the backdoor kicked in and the window to the nursery broken, “One of the back windows was shattered out, it was upsetting, “ Leininger said. “It’s is just sad, sad someone would choose to do that.”

Once inside the church Howland went into the main office where he found money in the secretary’s desk, “That’s the only actually theft we could figure out.” Howland took all of the petty cash from that drawer, a total of $8.

Leininger said, “When you don’t know why someone would do such a thing, that’s the disturbing part.”

According to court documents, Howland told police he had just been kicked out of his house. At the time of the break-in, he was 18-years-old, unemployed, and homeless.

Leininger said if Howland would have apologized or explained, he would not have involved his “If there would have been a desire to confess to this and to work it out,” Leininger said, “Then it wouldn’t have been an issue at all.”

If it was up to him, Leininger said he would have given the 19-year-old two years of community service, not two years in jail. But the Kosciusko County Prosecutor said the Howland got off easy. According to Dan Hamilton, because the teen broke into a church, he faced a Class C Felony, which could have gotten up him to 20 years in jail.

But Howland did not meet with the pastor. Instead, he made a plea deal with the prosecutor. The burglary charge was reduced to a Class B Felony and the judge actually gave the 19-year-old the minimum sentence, two years in jail.