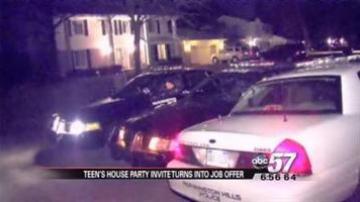 FARMINGTON HILLS, Mich. - Ten cops were sent to a house for a massive house party, but the party never even started. The cops were simply there for crowd control.

A high school senior sent out a party invitation via twitter. That invitation ended up going viral and hundreds of people showed up for days!

Cops have been shooing away would-be partiers since Thursday.

While it's caused his family a big headache, the teen's mishap actually caught the attention of a major media company and they've offered him a job as a blogger.

Jalopnik, a blog owned by Gawker Media, reached out to the teen. “I’m hoping that he's going to decide to take this [job] because it's going to be a real great opportunity for him," said Ray Wert, Editor-in-Chief at Jalopnik.

Curious why the party invite got such a huge following? The teen titled it "Project M,” a play on the recently released teen party flick Project X.

Right now, the young man is weighing his options and hasn't accepted the job offer. And after the fiasco, his twitter account jumped from 300 followers to 9,000!