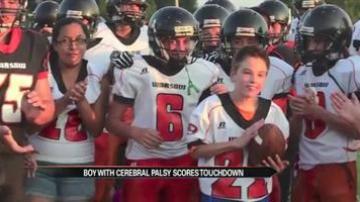 WARSAW, Ind. -- A 13-year-old boy born with several disabilities wanted to be on his school's football team. Tuesday night, he not only played on the team, he scored a touchdown - and touched the hearts of everyone at the game.

In a charity football game between two Warsaw middle schools, Jacob Brock scored a touchdown for the first time in his life.

The play was caught on video and has everyone in Michiana cheering for number 22.

Brock's teacher, Mrs. Tiffany Alberts has played a huge role in his life. She shed a tear as she talked about the big smile on his face after he scored the touchdown.

"Typical kids have the opportunity to do that everyday and he doesn't. And I felt like why not give him a shot  and it was really neat," said Albert.

"Mrs. A" as Brock calls her, said he has great coordination for someone with cerebral palsy.

She said Brock has touched her life and she knows his determination to overcome the odds will touch many others.

"For him, running across the field is a big huge success," said Albert.

Brock was feeling pretty confident as everyone cheered and laughed as he "spiked" the ball onto the ground. He even turned into somewhat of a celebrity. The cheerleaders wanted to get a picture with him.

"I was extremely happy for him, and I know all the cheerleaders were. We made up a cheer for him and we made posters. It was amazing," said cheerleader Alexis Walton.

The video of Brock scoring has gotten thousands of views on YouTube. His mom, Charity Brock, says she never thought the video would get all this attention.

"It's very overwhelming. We have both gotten happy tears numerous times. We've watched the video over and over again because it's really, really cool. It's very emotional. We didn't know it would be such a huge ordeal," said Charity Brock.

Several of Brock's family members got to watch him score the touchdown and says it is a memory she and his family will never forget.