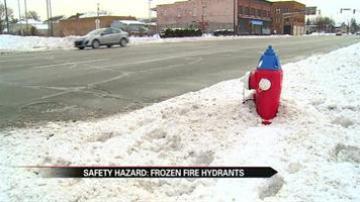 SOUTH BEND, Ind. -- When there's a fire, you expect firefighters to have enough water to put out the fire. This time of year, that's easier said than done. Because of the below freezing temperatures, many fire hydrants are frozen or buried under mounds of snow.

"The firefighters will hook onto one of these two connections to put out a fire. After you shut this fire hydrant off, it's designed to drain down below the frost line so it does not freeze," said Robert Krol, Director of Distribution, South Bend Water Department.

If only it were that simple. Some of South Bend's fire hydrants are just shy of 100 years old.

"The stem- when we turn the stem on-it's basically frozen. You can't move it up or down and no water comes out," said Fire Marshal Chico Rodriguez of the South Bend Fire Department.

Rodriguez says they freeze when the temperature dips into the single digits.

Firefighters don't waste time trying to thaw it out. They just find another one.

"We found a frozen hydrant we can't get any water. So we go to the next company who is near a hydrant or in the area of a hydrant and call that person," said Rodriguez.

Firefighters then call the water department.

Crews check about 50 hydrants a day this time of year with a weighted string.

"We have a six-foot long weighted string that they drop into the barrel. If it drops down to the bottom with no water on it then we know its fine and the fire hydrant has drained, but if we drop it down and it stops right there then the fire hydrant froze," said Krol.

All this deep snow is a nightmare for firefighters who need to try to locate a hydrant quickly.

The best thing you can do is to dig out the fire hydrant and clear about three feet around it. It can save precious time and even save a life.

"If we don't see it then we have to start digging for it and that takes time," said Rodriguez.

Rodriguez says the only thing worse than a frozen hydrant is a frozen one buried in snow.