Ten Irish to play for NFL 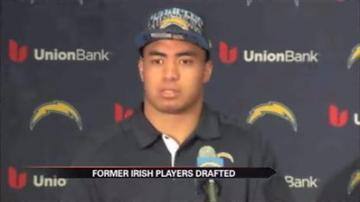 NEW YORK —The effects of the NFL draft weekend are still rippling for the former Irish.

Sunday afternoon John Goodman announced he is  headed to the Cincinnati Bengals as a free agent. He'll join his high school and college teammate Tyler Eifert who was drafted 21st overall.

Manti Te'o talked about what's to come for him in San Diego.

"I think after the couple months I've had, I'm ready," said Te'o.