Tensions rise between the U.S. and North Korea 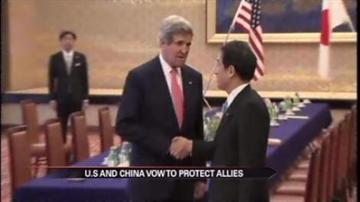 TOKYO — Secretary of State John Kerry has landed in Japan where experts say North Korea is most likely to aim their missile test.

Ready with missile interceptors, the United States and China plan to work together to protect the allies of each country. This includes those closest to the threat in South Korea.

"We want to be calm and act as if things would be normal, and nothing will happen because that's how it is supposed to be," said Sae Jung Ki, a resident of Seoul.

People in South Korea have been threatened by the North before and don't want to let fear control them.