Terrible Tuesday on the toll road 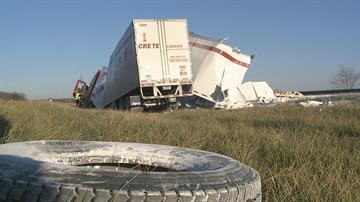 LA PORTE COUNTY, Ind. – Smashed trucks, debris and even flour littered the Indiana Toll Road in La Porte County on Tuesday after three accidents in less than three hours happened within miles of each other.

The first crash happened at around 10:30 a.m. at mile marker 62 near the St. Joseph and La Porte County line when a FedEx delivery truck drove off the road and nearly went off an overpass and sent debris flying into traffic.  According to police one driver suffered minor injuries as a result of the accident which is still under investigation.

Crews were just clearing the first accident scene when another semi-truck jackknifed near mile marker 67 at around 1:00 p.m. and brought traffic to a standstill once again.

The traffic back-ups from the first two accidents led to a third that ended up causing the biggest mess of the day.  Just before 1:30 p.m.  the driver of a semi carrying 42,000-pounds of flour didn’t notice that traffic had stopped until it was too late to avoid a collision.

“He did not realize that traffic had slowed and at the last moment tried to swerve into the passing lane to avoid colliding with another semi,” described Trooper Charles Murphy with the Indiana State Police.  “He was unsuccessful and the contents of his trailer were strewn all over the roadway.”

Flour literally covered the roadway and white clouds were whipped up by passing traffic as crews spent nearly five hours moving the flour off the road.  Police said it was miraculous that nobody was killed on Tuesday.

“People need to pay attention to other drivers as well as watch their speed,” Trooper Murphy explained.  “Some of the biggest reasons for crashes are following too close, speed, unsafe lane movement.”

The driver who suffered minor injuries in the first accident was the only person hurt as a result of the accidents.