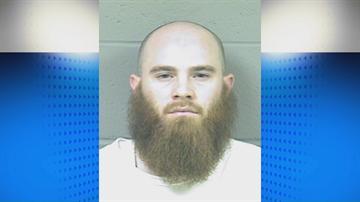 ST. JOSEPH, Mich. – A St. Joseph man is under arrest for charges stemming from a terrorism investigation.  Reed Berry, a 26-year-old who lives in Royalton Township, was arrested for charges that he attempted to assault an FBI agent who was part of a team running surveillance on Berry.  Court documents detail the incident, which took place on Sept. 9 as the FBI maintained round-the-clock surveillance during the weekend of the 10th Anniversary of 9/11 and agents followed him along Woodland Drive as he was headed towards his home on the 4600-block of Terra Lane.

“He then stopped in the middle of the road, and I also stopped,” FBI agent Samuel Moore described in court documents.  “Without warning, and while I was sitting in my vehicle behind him with my headlights on, Berry suddenly put his vehicle in reverse and drove it directly at my vehicle at a high rate of speed.”

The agent was able to dodge Berry’s vehicle and allowed him to continue home.  The FBI investigation into Berry began earlier this year, on March 9th agents searched his home.  According to FBI reports the warrant to search Berry’s home came after evidence was found that he was in contact with terrorist organizations.

“The FBI’s investigation to date had developed information that Berry was using the Internet both to contact and to provide affirmative support to one or more FTO’s (Foreign Terrorist Organizations),” the FBI report details.

In May agents were also granted access to Berry’s email account.  It isn’t certain why, but FBI agents decided to keep Berry under surveillance during the weekend of the 9/11 anniversary.  According to court documents, Berry was aware he was being watched.

“Berry aggressively ran towards TFO Dyksterhouse’s vehicle, looking directly at him and shouting angrily as he ran,” the document describes.

Three times Berry allegedly approached agents in their vehicles, later that same day the incident on Woodland Drive took place as agents followed him from a location in Benton Harbor.  The surveillance of Berry answered questions nearby residents had about suspicious incidents in the neighborhood.

“A couple times a black SUV would come up really slow behind me as I was coming up to Terra Lane would stop almost at the corner there and there was someone talking on a cell phone and I saw that happen, that happened to me like twice and I thought that was a little suspicious,” explained Karen Webber who lives on Woodland Drive.

Webber and other residents described that they were shocked to learn FBI surveillance and a terrorism investigation were going on in their quiet neighborhood.

“It’s quite scary, there’s a lot of kids in this neighborhood, a lot of old people, people that really can’t defend themselves,” Webber explained.  “I don’t know what kind of terrorism he was involved in but it’s just very scary.”

Berry has a history of marijuana possession charges with the Berrien County Sheriff’s Department and probation violations related to continued use and possession of marijuana.  Previous charges were part of the reason Berry was denied bail before his trial.  Documents state that he is considered a flight risk, has a wife in London and an FBI source who was indicted for terrorist-related activity told FBI investigators that Berry wished to “vacation” in Somalia.  Berry is on the government’s no-fly list.