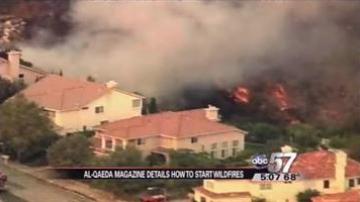 Experts say terrorists are either getting more desperate or more creative.

It appears they're looking to attack the U.S. with wildfires. al-Qaeda's English language magazine called “Inspire” is offering detailed advice on how to start huge forest fires.

Terrorism experts say al-Qaeda's failure to recreate a September 11 style attack in big cities is forcing it to adapt another strategy.

"They have moved on to death by a 1000 cuts,” said ABC News consultant Brad Garrett. “They will try a number of smaller operations but launch them more regularly."

The would-be terrorists are told how to study wooded areas, read weather maps for dry conditions, make timed explosives and bombs to set blazes in the U.S.