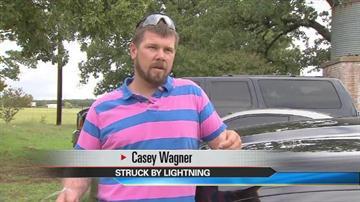 SAINT JO COUNTY, Texas — Lightning usually does not strike the same place twice. But for one unlucky Texas man, that was the case over the weekend.

Casey Wagner, 31, was attending an event Saturday. He was using a tree for cover when the lightning struck.

"What I remember is just a loud boom and it dropped me to my knees and then right when I was going to my knees, it hit me again," says Wagner. "When I got hit was just two big old flashes and then sparks went everywhere."

He says he felt electricity go right up through his boot and then the rest of his body.

When he arrived at the hospital, doctors told him his poncho was still carrying static because it was made of plastic.