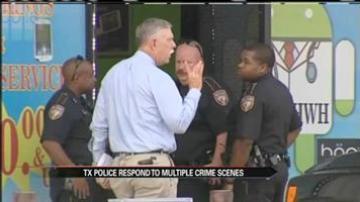 Dateline is wrong format, headline is incorrectly formatted, could get us sued because we convict the suspects...

HOUSTON - It was a confusing situation for Texas police as they responded to 3 crime scenes within minutes of eachother.

The first was a cell phone store that was held up Monday. The owner took off after the subjects.

Police say the owner of the cell phone store confronted the criminals and then shot one of the thieves. He then loaded him into his Hummer and tried to take him back to the store.

The shooting victim bolted from the vehicle and made his way to a nearby house where an ambulance was called.

An employee of the cell phone store is calling her boss a hero.