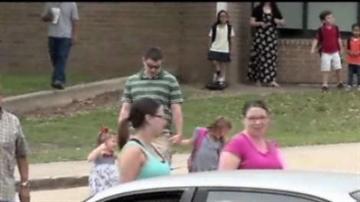 UNIVERSAL CITY, Texas -- Students in Texas are being punished for getting to school late even if their parents are the reason why.

A school is punishing the students when their parents drop them off late too many times and the parents say it is not fair.

A six-year-old even got detention.

Her parents are taking the blame but the school says this is their policy.

"This just happens to be one of the consequences for being tardy at that particular campus," said Steve Linscomb, Judson Independent School District.

"The policy is she has to sit by herself in a desk against the wall facing the wall not with her friends," said Brad Loeffler.

The school district says each school has their own policy.

They say this one was not meant to punish the student but since it has started, it has worked.

As much as 90 to 95 percent of tardies have been cut down.