The Cove stepping up security in response to Boston terror attack 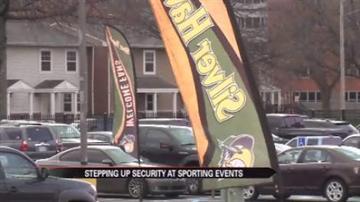 SOUTH BEND, Ind. -- Around the country, airports, train stations and sporting arenas are stepping up security in light of the tragic event at the Boston Marathon.

The Sliverhawks are just one of the many sports teams beefing up security.

The tragedy in Boston is weighing heavily on everyone’s hearts, even at The Cove. Before the first pitch there was a moment of silence for the victims.

Flags at half staff served as a reminder of the horrific terror attack at the Boston Marathon.

While everyone’s hearts go out to the victims of Monday’s attack, Silverhawks fans say they are not worried.

Yet, for the Silverhawks’ security, it was a different story.

"Being a sporting event, in a public venue, we wanted to take some extra precautions, just to make sure our fans feel safe when they come out," said Sliverhawks team President Joe Hart.

Hart says not only do they have an added police presence, but they also have security checking all bags and heavy coats at the gates.

"We have instructed all of our ushers to keep your eyes open, take a look for everything," said Hart. "Even with the staff, if you seen anything that looks out of the ordinary, it’s better to be safe than sorry."

While fans appreciate the extra precautions the stadium is taking, they say living in fear is not an option.

"That’s their goal. So, if you want to live like that, be afraid, then I guess that is a choice you make," said Colvin. "We’re not going to make that choice."

Now, the choice to beef up security is an effort the Sliverhawks organization say it will continue.

"This is not just a short term measure. It’s something we will continue to do for the entire season," said Hart. "Unfortunately with the instances that happened there it just further drives home that you can’t take anything for granted."

Those at The Cove say they are encouraging everyone, not just their staff, to be more vigilant and report anything that looks suspicious.