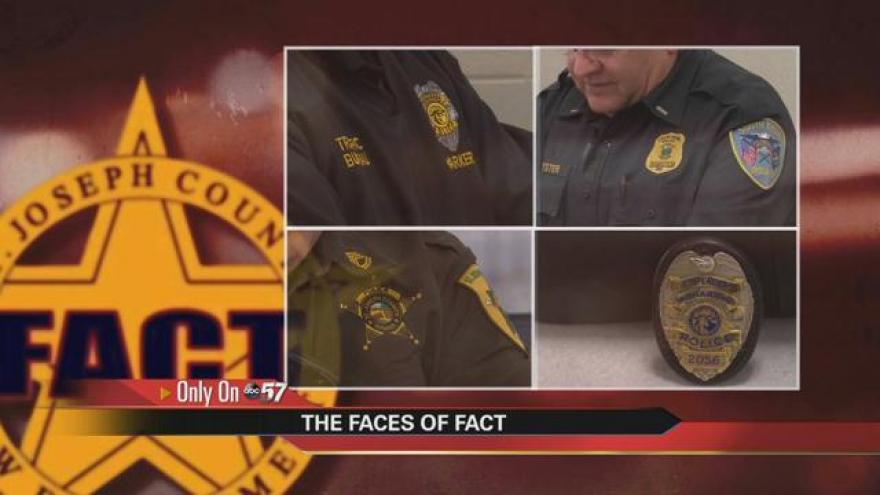 When there’s a fatal crash in St. Joseph County, there’s one team you call—FACT. Only on ABC 57 News, we’re introducing you to the ‘Faces of FACT.’

“I’m not sure the word team even does it justice,” said the FACT Commander. Captain Tim Spencer.

“The individuals on the team just seem to blend. I don’t know how to describe it. We all have the same common interest,” said one FACT squad leader, Lieutenant Gene Eyster.

That interest is making sure the people who cause tragic crashes are brought to justice.

“FACT is charged with investigating crashes that result in serious bodily injury where impairment is involved,” said Captain Spencer.

That’s where they got the original name, Fatal Alcohol Crash Team.

“Currently our marching orders are to investigate any fatality with a surviving driver,” said Commander Spencer.

Now, they go by Fatal Crash Team, and it’s one of two teams in the state.

The other one is in Marion County and started in 2001.

“They’re the original FACT team in the country. We like to say we took a good idea and perfected it,” said Captain Spencer.

They’ve been perfecting it since the prosecutor’s office received a state grant in 2005.

“I know no one in the state has the success rate that we do, and it’s basically because of the guys that are on the team,” said Lt. Eyster.

All of the current squad leaders have been with FACT since the get-go.

“I think every policeman that works in this community whether they think of it in these terms or not, they got started in this job to serve others, to serve the community, you know that overused phrase, to help people,” said Commander Spencer.

That mindset is crucial when they’re called to a scene, like the hit-and-run that killed a man their very first year—2006.

“He was crossing the street in the 3300 block of Edison Road late at night, and was struck,” said Lt. Eyster.

“At that time our witnesses only saw what they believed was a white service van. That’s all we had to go on. In this case we only had a small piece of plastic about the size of a quarter that had broken off the grille, and a side marker light,” he said.

“To some degree luck, some good investigative skills, we recovered the windshield that had been replaced in that van, as well as the front grille,” said Eyster.

They found it in an auto body shop all the way in Lake County, Illinois.

“We were able to with the assistance of fractured match analysis to show that that piece of plastic actually went in that grille, and nine months after the accident, from that distance away, we were able to get a confession from that driver who had tried to conceal this for nine months,” said Lt. Eyster.

The driver went to jail.

“That’s something that as a specialized unit, you can do stuff like that. We were able to get that done fairly quick and get a conviction,” said FACT squad leader Sgt. Corey Brothers.

Convictions are this FACT team’s specialty.

“It’s a well-known fact throughout the county, throughout the state, that if the FACT team from St. Joe County is on your case then you need to be fearful,” said Lt. Eyster.

“These folks just weren’t being held accountable in our estimation prior to this. It was very rare for somebody involved in an OWI homicide to get any jail time pre-FACT. Now, it’s very much the norm,” said Commander Spencer.

“Prior to this, we had roughly ten cases where people had been drunk, they were driving on the road, they caused the crash, and they killed someone, and they didn’t go to jail… and since that time, most individuals who are charged and ultimately convicted by FACT investigation go to prison,” said St. Joseph County Prosecutor Ken Cotter.

They say it’s probably because they treat crash investigations as if they were homicides.

“Traditionally, people look at DUI deaths as ‘oh, it’s an accident,’ but it’s not an accident. Somebody died as a result of someone committing a crime,” said Prosecutor Cotter.

Back in 2008, they were even able to get a murder conviction.

Off-duty Roseland Town Marshal Craig Toner was riding his motorcycle when an SUV slammed into him, leaving his bike in pieces.

“Because of the investigation, we were able to determine that after the first crash, he saw there was a person laying in front of him, got back into his vehicle, and drove over him, knowing full well that that was going to kill him,” said Cotter.

That driver is still in jail.

Because of this impressive track record, the National Highway Traffic Safety Administration considers this team the gold standard.

“St. Joe County, Indiana, modeled for fatal crash teams, is now the national model for teams that use their funding to start teams across the country,” said Captain Spencer.

“Personally, it gives me a little more drive, a little more determination on the next case to know that we are doing something positive,” said Lt. Eyster.

“These uniforms are immaterial. Yes, we have a little banter back and forth because one belongs to this agency or that agency and its size or representation, but when we respond to these scenes, there’s no uniform for the most part. Everybody’s got the same thing on, and that’s a vest that says FACT, and everybody has the same goal,” said Lt. Eyster.

Right now, FACT has 24 members, and 14 of them have been a part of it since the beginning.

In the past 11 years, they’ve investigated almost 160 cases, which works out to about one every other week.

Through it all, these officers approach their cases with passion and dedication.

Next time you see those yellow vests on the side of the road, maybe you’ll think of these ‘Faces of FACT.’