The potential political impact of the Orlando massacre 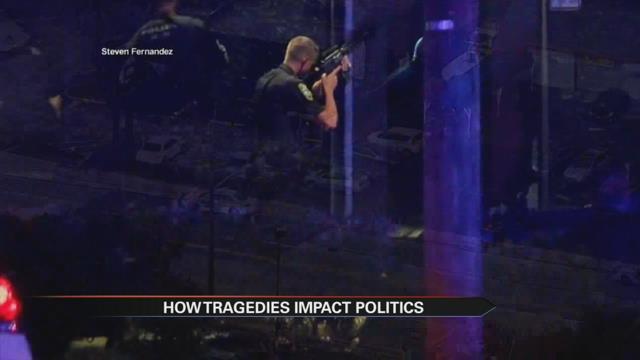 Local political leaders and a political scientist talk about the impact a tragedy like the Orlando massacre can have on the upcoming election, and the minds of Michiana voters.

“When I’m elected, I will suspend immigration from areas of the world where there is a proven history of terrorism against the United States, Europe or our allies, until we fully understand how to end these threats,” Presumptive Republican Presidential Nominee Donald Trump said in a speech Monday afternoon.

“Inflammatory, anti-Muslim rhetoric and threatening to ban the families and friends of Muslim Americans, as well as millions of Muslim business people and tourists from entering our country, hurts the vast majority of Muslims who love freedom and hate terror,” Presumptive Democratic Presidential Nominee Hillary Clinton said in a speech Monday afternoon.

Trump and Clinton spoke out in wake of the deadliest mass shooting in U.S. history.

In Michiana, local political leaders said this latest mass shooting places a spotlight on the issues most important to Indiana voters.

But after speaking with the heads of the St. Joseph County political parties Monday, the differences in their beliefs was evident.

“Security is the number one priority, yes,” St. Joseph County Republican Vice Chair Lynn Fitzpatrick said. “This is not hate. This is security.”

“There’s a lot of hypersensitivity on the equality issue and looking out for those voices in our community that might not be able to speak as loudly,” St. Joseph County Democratic Chair Jason Critchlow said. “And secondary is, I’m hearing [from voters] a lot about just the issue of guns, and then right along with that is national security.”

She advises Michiana voters to pay close attention in the coming months to how the candidates for president react to this terror attack.

Bennion’s point is that there is a sharp divide between how our leaders want to respond to this latest massacre, thus fueling a debate ahead of the general election.