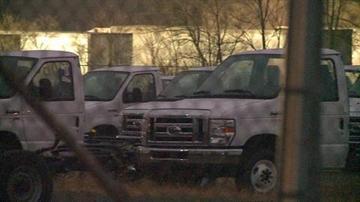 ELKHART, Ind. – Another theft of catalytic converters was reported earlier this week in Elkhart. In the past month, more than 100 have been stolen in the county.

This time thieves cut through a fence and drove a vehicle onto the lot to get to the goods.

The theft marks at least the fourth time someone has stolen more than a dozen catalytic converters at a commercial vehicle business in or near Elkhart in the last month.

Police continue to investigate the thefts.

Catalytic converters are a prime target for thieves due to their untraceable nature and the valuable materials inside them.

Most catalytic converters are made with platinum, but palladium and rhodium are also used.

No matter what metal is used, the value of the scrap is high. Anecdotal accounts from residents of Elkhart put the value per converter anywhere between $50 and $100, depending on where it is sold.

Police are working with area scrap and recycling yards to identify suspicious activity.

But some people say the thieves would be willing to drive a few hours to Chicago to salvage such lucrative materials.