Thieves steal hundreds of pieces of equipment from Supreme Corp. 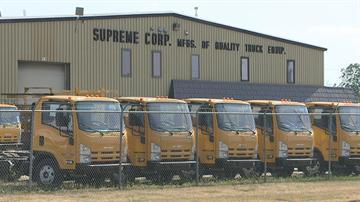 GOSHEN, Ind. – The theft of catalytic converters and other equipment from local manufacturers is unfortunately common, but the burglary from Supreme Corporation this past weekend could be one for the record books.

Thieves made off with 120 catalytic converters and 130 oxygen sensors after breaking into one of Supreme Corporation’s storage lots on E. Kercher Road.

“We recently announced an expansion, in Goshen, of our facilities and we’re extremely busy right now, business is very good,” explained Supreme Corp Vice President of Operations Michael Oium.  “It hit us at a bad time and perhaps a good time for them there’s a lot of chassis here on our property.”

Oium explained they do have security at their facilities that has since been beefed up.  He believes the thieves were after the platinum and other metals found in the stolen equipment.

Stealing 250 pieces of equipment must have been a large operation according to Oium.

“They cut the lock on the fence and accessed through the gate and then actually put their own lock on the fence so that leads us to believe they were back probably several times,” he explained.  “That’s a pretty tricky situation…I would guess it took multiple trips and multiple people to get this operation done.”

As of Wednesday night, Supreme Corporation’s insurance company was still working on estimating the cost of the thefts.  The company is hoping the incident won’t delay deliveries and are expediting repairs to the trucks that were hit.

The Goshen Police Department is investigating the case and asks anyone with information about the thefts to call them at 574.533.8661 or Crimestoppers at 1.800.288.STOP