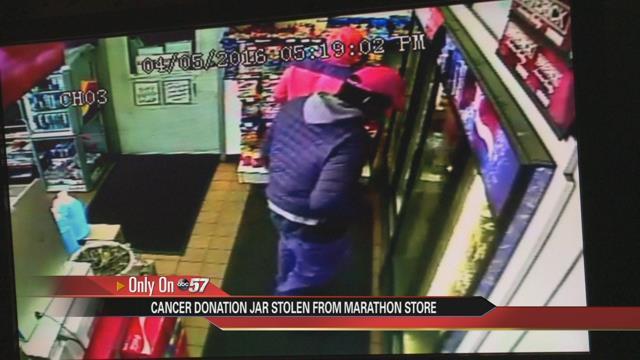 A Marathon gas station employee’s brother died of cancer, and to honor him, employees put out a collection jar to raise money for Relay for Life.

Thieves not only snatched the jar, but also the money.

“It’s just disappointing. We have so many great people that give money to them, and all of a sudden, it just takes one or two people that just make it bad for everyone else,” said Ron Banicki, owner of Ron’s McKinley Marathon.

He received a call from a concerned cashier.  The collection jar for Relay for Life was missing.  One of the employee’s brother recently died of cancer, and he was trying to raise money for cancer research in his honor.

“We’re anticipating that it was fairly full,” said Banicki.  It’s been here a couple weeks. It probably had between $75 and $100 in there between bills and change. I came down and upon investigating the video tape, I was able to indicate two male blacks had come in about 5:20 p.m.”

According to Banicki’s tape, one of the men grabbed the collection jar, and packed it out of the store.

Banicki is asking anyone with information to come forward.  However, this theft isn’t stopping the Marathon employees from helping Relay for Life.  They plan on putting out another donation jar.

The suspects drove away in a dark blue Chevy Impala.

If you have any information on who the suspects are, contact South Bend Police.