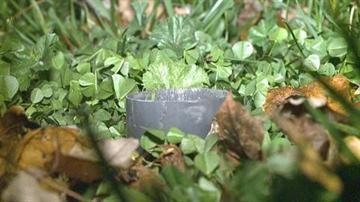 SOUTH BEND, Ind. – For the third time thieves struck at 1149 East Calvert Street in South Bend. The first two times the home was burglarized, but this time around they took the 30 foot flagpole. As has been the case at this home, the crime was committed in broad daylight.

The seemingly constant crime in this neighborhood on the south side of the city has the man living at the home, Brian Yost, at the end of his rope. “I went way past fed up a long time ago. This, this is the straw that broke the camel’s back. I’m done,” said Yost.

In April, Yost’s home was broken into and several guns were stolen. In October his good friend and neighbor John Wise’s home was shot. The bullet nearly hit his wife sitting on the couch. And then Monday, thieves were back and this time they took off with his flagpole and both flags on it.

Other problems the residents have had include; Wise’s garage and home being burglarized on separate occasions; his truck was set on fire and; he found a man shot in the chest in the alley behind his home.

Because he has lost all confidence in the South Bend Police Departments ability to consistently keep his family and property safe, Yost is ready to take matters into his own hands.

He has already stated he will shoot to kill anyone who enters his home illegally. Now, he is planning to build a fence to keep people off of his property. “I am putting up a six foot chain link fence that will be electrified around this piece of property and I am daring the city of South Bend to tell me to take it down; because I will take it all the way to the Supreme Court. I have a right to protect my property and my family and I’m going to start doing it,” said Yost, Tuesday night.

When asked if he felt electrifying the fence was taking it a step too far he simply stated, no. “It will be a pulsating electricity, just like a cow fence. You touch it; it’s going to knock you down. It won’t hang on to you, it won’t electrocute you. There will be signs posted on it saying it’s electric, do not touch,” said Yost.

While many could assume he is letting his emotions dictate his actions, he seemed clear headed on what he wants to accomplish. “If I could I’d put razor-wire across the top of it,” said Yost.

Clearly, Yost will not be allowed to accomplish much of what he wants to with his fence. He could erect a shorter non-electrified fence like his neighbor Wise has.

The fence around his yard is one reason Wise thinks thieves have not targeted his property; the other would be the large dog that looks ready to attack you if you set foot in his yard.

After talking with Yost, it is clear; he wants the neighbors to start watching each other’s property. And, if it is necessary, he isn’t beyond doling out some vigilante justice should the opportunity arise.