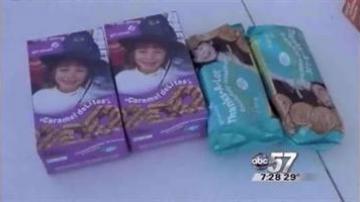 Two men in their late teens stole from a Girl Scout troop selling cookies outside a Wal-Mart ,in Houston.

Instead of running for help, the girls ran after the thieves.

One of the troop cadets said she started to hit the passenger in the getaway car.

The scouts admit that it was dangerous to chase after the men but the girls didn't want them to get away.

Rachel Johnson, one of the brave Girl Scouts said, ""Who steals from a Girl Scout? I mean
seriously? That's like the worst thing ever!."

The troop said the thieves got away with a cash box that had abut 20 cases worth of cookie money inside.