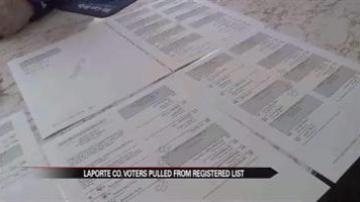 According to La Porte County Clerk Lynne Spevak, the error was found last week when an early voter was turned away from the polls.

An investigation found that approximately 13,000 registered voters were purged in February of 2011. Only 800 voters should have been removed from the list at the time due to death, change of address or ineligibility.

“Why it went any further I don’t understand,” said Spevak.

Spevak said 80 percent of the 13,000 purged voters were taken off illegally by the La Porte County Election Board.

"The voters were cancelled in violation to the federal law.”

“There were simple rules to follow I don’t know how it was an oversight,” said La Porte County Democratic Chairman John Jones. “It’s suspect at this time.”

Jones is pointing fingers at La Porte County Republican Chairman Keith Harris. Harris, who is running for county clerk, used his position as chairman to appoint his wife to the election board in 2011.

“Democrats are being disenfranchised and kept from their voting rights,” said Jones.

“Nothing could be further from the truth,” Harris said.

Harris said the errors by the election board were honest mistakes. He said that his wife didn’t receive proper training in purging voters and added that the two other election board employees are Democrats.

“I think (Democrats) are concerned about local races this year and this is their way to divert attention away from that,” said Harris.

“I don’t want anyone to be in trouble however if someone did something illegally, violations need to be dealt with according to law,” said Jones who added that the U.S. Department of Justice has been asked to further investigate the situation.

On Thursday the State of Indiana reinstated all 10,000 of the purged registered voters.