Thousands of Trump University students file to get their money back 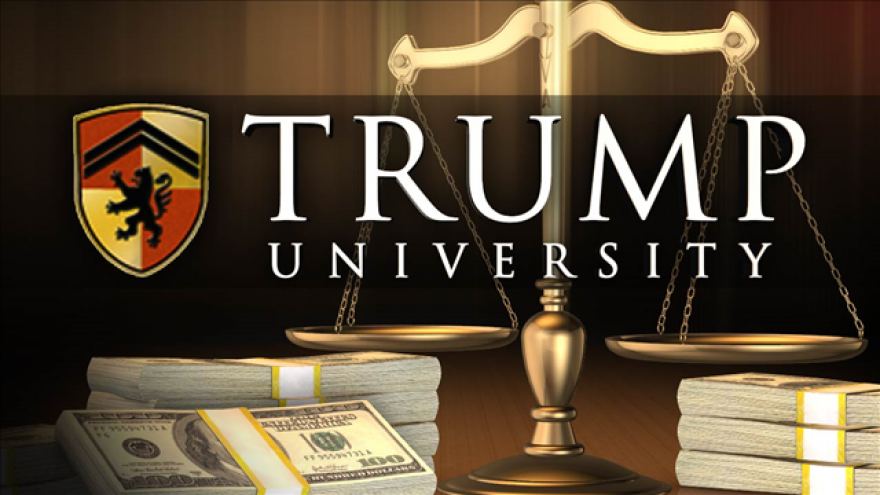 NEW YORK (CNNMoney) -- Thousands of former enrollees at Trump University are one step closer to getting back at least some of their money.

More than 3,700 of them have filed claims as part of last year's $25 million settlement agreed to by President Donald Trump, according to an attorney for the plaintiffs in the case. About 7,000 former students were eligible to submit claims, but the deadline to file was March 6.

If the court approves the settlement, former students are projected to receive back about 80% of the money they spent on live seminars or mentorships from the now-defunct, real estate education program, says Rachel Jensen, the class counsel for students nationwide.

The settlement brings the possible closure of three lawsuits that claimed Trump University defrauded students and threatened to drag Trump into court early into his presidency.

A court hearing will be held on March 30 to decide whether to approve the settlement, though one risk is a late challenge from a former student. Sherri B. Simpson of Ft. Lauderdale, Florida filed an objection to the settlement with U.S. District Judge Gonzalo Curiel in San Diego, where the cases have been consolidated.

Simpson, who says she spent about $20,000 on Trump University courses in 2010, told CNN she wants more from the President than just a portion of her money back.

"What he did to me and what he did to everybody else was really fraudulent and I'd really like to take him to trial. I'd like to hold him accountable," Simpson said.

Simpson said in addition to a refund and three times the amount she spent on the programs, she also wants an apology from President Trump.

John F. Banzhaf III, a law professor at George Washington University, said Simpson's objection could delay or even derail the settlement, because if the judge rules in her favor, the settlement would have to be adjusted to allow additional students to opt-out. If the judge rejects her argument, she could appeal.

"What she is doing could torpedo the settlement. If the court grants her request, it means she would be free to sue Donald Trump on her own," Banzhaf said.

Trump University is the defunct, for-profit real estate seminar business Trump launched in 2005. It promised to teach students investing techniques they could use to get rich in real estate -- just like Trump.

Some students ended up paying tens of thousands of dollars. While the initial Trump University seminar was free, teachers would then upsell them for another program. A "one-year apprenticeship," which was effectively a three-day seminar along with the phone number for a "client advisor," cost $1,495, according to court documents. A "mentorship" cost at least $10,000 and the most expensive, the "Gold Elite" program, cost $35,000.

Trump University effectively closed in 2010, the same year the New York Department of Education directed the program to stop operating without a license.

Was it a fraud? In advertisements, Trump said he "hand-picked" the instructors himself, but during a deposition, Trump did not remember a single instructor when a list of names was read. Lawsuits also argued the program was marketed as a university when it was not licensed.

The first of the three lawsuits was filed in 2010. Ultimately, there were two class action suits and a suit from the New York Attorney General Eric Schneiderman.

Donald Trump agreed to settle on November 18, just 10 days after his victory. It saved the president from having to testify in a trial in San Diego.

The settlement is a complete turnaround from Trump's earlier position on the lawsuits. "This is a case I could have settled very easily, but I don't settle cases very easily when I'm right," he said in March 2016 at a Republican presidential debate.

"We are pleased to announce the complete resolution of all litigation involving Trump University," a Trump Organization spokesperson said at the time of the settlement.

"While we have no doubt that Trump University would have prevailed at trial based on the merits of this case, resolution of these matters allows President-Elect Trump to devote his full attention to the important issues facing our great nation."

Trump has remained defiant about the settlement, even suggesting in a Tweet in June he may re-open his shuttered school in the future. When the settlement was reached, then President-elect Trump tweeted: "I settled the Trump University lawsuit for a small fraction of the potential award because as President I have to focus on our country."

Felicisimo Limon, one of the former students who submitted a claim, told CNN he lost about $30,000 on real estate courses he called, "all lies."

Limon, a retired Navy veteran, and his wife attended a free seminar near San Francisco in 2008. He says Trump University representatives convinced him to pay thousands of dollars for seminars he later realized did not include any advanced real estate techniques.

"I am really happy there is a settlement. I was not looking forward to a court fight with Donald Trump," Limon told CNN on Monday.

He says the Better Business Bureau of Metropolitan New York, which is administrating the settlement, asked him for receipts of his payments. And after several years Limon says some of his receipts are missing.

He isn't sure of what the final amount of his settlement will be but joked that he deserves more than he put in.

"I think they had my money for so long, they should give me interest on top of it," he said.

Bob Guillo, another former student profiled by CNN, said he's out $35,000 and that he deserves all his money back. Though he thinks the settlement is unfair, the 77-year old retiree doesn't want to go through a drawn out lawsuit.

The attorneys involved waived all fees.