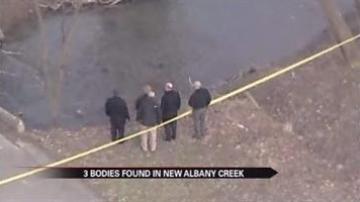 NEW ALBANY, Ind. — A homicide investigation is underway in New Albany after police discovered three bodies in a creek.

Police found the bodies of a woman and two children.

Officers said one of the children was under the age of two. And the other child was an adolescent.

The victims have not been identified. And the cause of death has not been determined.