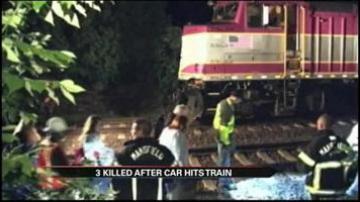 Three people were killed in a train crash in Massachusetts Sunday night.

A car hit the train causing it to go off the tracks.

All three people inside the vehicle died.

There were nearly 200 people on the Amtrak train, none of them were hurt.

"The scene is ongoing.  There is a tremendous amount of work that still needs to be undertaken, and there's even more facts of this whole incident that we simply do not know at this time," says Mansfield Deputy Fire Chief Jim Puelo.

According to the Boston Globe there are no railroad crossings in the area.

Investigators are looking into how the vehicle ended up on the tracks.