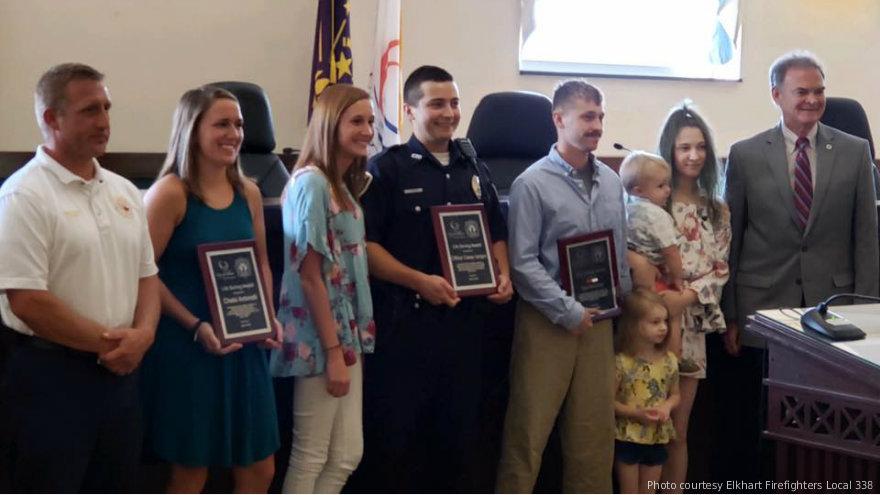 Pictured from left to right: Antonelli, Ianego and Mellinger

ELKHART, Ind. --- Three life-saving awards were presented to local heroes whose selfless acts saved the lives of others.

The awards were presented by Chief Carey and Elkhart Mayor Time Neese at the Merit Commission meeting.

Chelsi Antonelli, an Elkhart firefighter and paramedic, was enjoying a day of kayaking with friends on June 6 when one of the kayakers overturned and became entangled around a tree that was partially submerged.

Risking her own safety, Antonelli left her canoe with a life vest until she reached the victim, disentangling them and saving their life. She was recognized as keeping with the high standards of the Elkhart Fire Department.

Casey Ianegro, a patrolman with the Elkhart City Police Department, upon arriving to the scene of a motorcycle accident, discovered a victim with a life-threatening wound to the leg, hemorrhaging blood.

Officer Ianegro successfully stopped the bleeding after applying a tourniquet. Elkhart General Hospital physicians and EFD paramedics say it was Ianegro’s heroic actions that resulted in the motorcyclist surviving the crash.

Tyler Mellinger was traveling toward Goshen Avenue eastbound on Jackson Street when he saw an SUV leave the roadway and enter the river.

Mellinger did not hesitate to enter into the river and rescue the female driver of the SUV. Mellinger suffered an injury to his arm during the rescue.

Authorities say Mellinger’s prompt and selfless act saved the life of the woman.

Three heroic acts by three heroic people, who forever changed the lives of others.

City officials recognized them all for their good deeds.