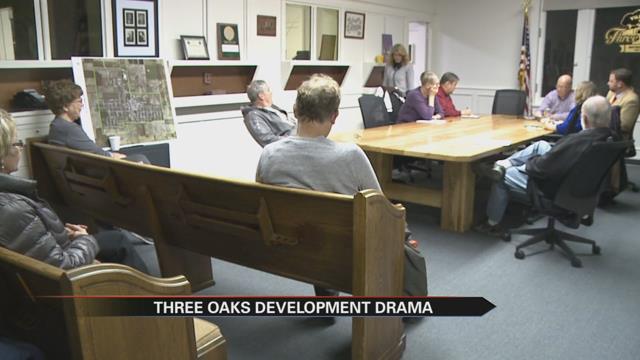 A small town in Michigan has to pay up after a developer pulled out of a multi-million dollar project.

Taxpayers in Three Oaks voiced their concerns to Berrien County and Three Oaks Village officials Wednesday about a lofty drainage system installed for a property that’s back on the market.

And until the vacant parcel is sold again the county and village will have to decide who’s responsible for the bill.

“The county is essentially willing to sell it for 50 bucks if somebody wants it,” said Adam Umbrasas, Three Oaks Village manager.

Fifty bucks for 36 acres of land that was once an opportunity for major development.

“Everybody was supportive of the idea initially because it would be a small burden to carry with possibly a larger return,” said Umbrasas.

Now, it’s just a big field of dirt carrying a lot of baggage for the county.

“When you’re paying $30,000 a year for an assessment on it, it doesn’t make it very attractive,” said Umbrasas.

A new drainage system was installed near the vacant land to support large development.

“This is what you get when you base development on speculation,” said Chuck Sittig, Three Oaks Township supervisor.

Months later, village taxpayers still question why the developer got out of the deal and why they are the ones left to pay for the assessment.

“How much can he just keep throwing on to somebody,” said one resident. “We’re just paying somebody else’s bill.”

During a town meeting, residents figured out the answers to these questions might not be solutions to the problem.

But it’s still a step closer to removing the burden of an abandoned property that’s draining this village.

“Hopefully it works out in the end and something comes up there,” said Umbrasas.

According to the township supervisor, those within the drainage district are looking at paying 25 percent more in taxes a year because of this assessment.