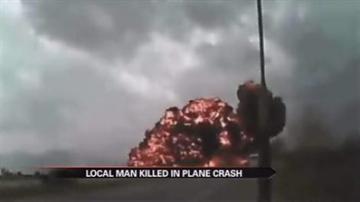 THREE RIVERS, Mich. -- A man who grew up in Three Rivers, Michigan died Tuesday morning in a plane crash in Afghanistan. Jamie Brokaw was a co-pilot for National Airlines and was one of five people from Michigan killed.

“I was stunned because the safety record for most of the airplanes is very good,” said Mike Hoag.
Pilot Mike Hoag was shocked to hear that his neighbor, close family friend, and fellow pilot was killed in a plane crash in Afghanistan.

“They were civilian contract pilots. They haul freight,” said Hoag.

Brokaw and six others were working for National Airlines on a U.S. government contract in Afghanistan, when Hoag says a load shifted and the plane’s weight became unbalanced.

“That made the plane tail heavy and made it climb straight up until it lost enough forward motion to keep flying and they had to correct and they did not have enough altitude to do that,” said Hoag.

The plane went down killing Brokaw and six others aboard. Hoag has known and flown with Brokaw for twenty years.  His family stores their plane in Hoag’s hangar. He told me Brokaw served in the air force for six years and was married just a year ago.

“I feel badly for his family, his wife, and step-daughter,” said Hoag.

Hoag remembers when Brokaw was just 13 and is sad to see him pass just twenty years later with so much life to live.

“He was very adventurous, funny, witty, very honest sincere young man. It was a pleasure to know him,” said Hoag.