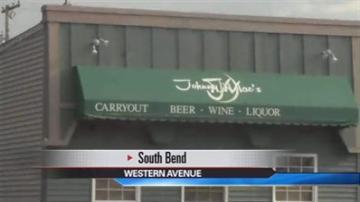 SOUTH BEND, Ind. -- Three have been three shootings in South Bend in four days. The latest shooting happened just Saturday night at three in the morning outside of Johnny Mac’s bar on Western Avenue.

A 21-year-old was pistol whipped and then shot in the leg.

Officers say the victim only had a flesh wound on his leg from the bullet, but neighbors in the area are still concerned about all the bullets flying in their neighborhood.

“I just heard the shots and next thing I heard was sirens and cars running up and down the street,” said Angel Torres.

Torres says if the loud music of Johnny Mac’s bar was not enough noise to keep him awake, the gun shots at three a.m. certainly were.

According to the police report, two suspects in their early twenties were angry because they arrived late to the bar and were not allowed in.  That is when a bar brawl began and 21-year-old Arsenio Rashad Smith was pistol whipped and shot in the leg.

Over 200 people were outside on Western Avenue when the fight occurred and 23 officers had to be brought in to secure the area.

Neighbors say police do their part to keep the neighborhood safe.

“They are always patrolling,” said Torres.

But they say the bar has become a nuisance and a hub for violence.

“I mean its rowdy,” said Torres.

Police seem to agree with Torres.

An officer filed a nuisance report against the bar saying the owner was cooperative but his employees refused to talk to the cops.

“I got four kids. It drives me crazy to think of something happen,” said Torres.

According to the police report, officers have two suspects in this shooting; 20-year-old Jason White and 23-year-old Jeremy Lamar.