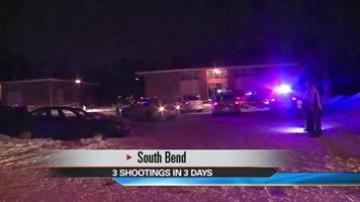 SOUTH BEND, Ind. -- Gun violence has been on everyone's mind since the Martin's shooting last week and Purdue shooting on Tuesday. In just the last three days there have been three shootings in South Bend. Residents are wondering if they should be worried for their safety.

There have been three shootings in three days in South Bend. It started Sunday night when police responded to a shooting at Corby Homes.

"What ultimately happens is we have two people that are struck while they're in an apartment. We have determined a person of interest and we are currently searching for that person," said Captain Phil Trent of the South Bend Police Department.

Monday there was a shooting in the 900 block of West Napier Street.

"Once again, a person inside their house is shot through their door after trying to basically close the door on somebody who was trying to get in," said Trent.

Tuesday night there was a shooting on the corner of Olive and Ford. There are two suspects and one person was shot.

"Again we're unsure of their motive but what we do have is leads and a place to start because these people are actually familiar with the person that did the crime," said Trent.

Police want the public to know these shootings were isolated events where the shooters knew the victims.

"As far as belaying fears of anybody that thinks that these are just completely random acts, being visited upon people who are simply completely unaware and these people are picking people at random doesn't appear to be so," said Trent.

Police say they are still investigating all three shootings and they are looking for as many as six suspects.