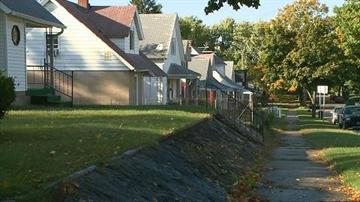 SOUTH BEND, Ind. – Police were called to the 1800 block of South Taylor Thursday afternoon for an apparent home invasion that resulted in a woman being tied-up.

Police found the female victim near hysterics, but were able to bridge a communication gap and get the information they need.

According to the victim, she was asleep in her bedroom when the doorbell rang. After going to the door, she didn’t see anyone on her porch.

On her way back to the bedroom, the woman says, she ran into three men coming out of her bathroom. She says one of them had a handgun.

She also says, all three were wearing green reflective vests like those worn by people working near streets.

The victim says, the men tied her up and burglarized her home, taking her television among other items.

After the thieves left, she was able to free herself and ran outside in hysterics. Neighbors rushed to her and the police were called.

The woman did not want to go back in the home until police searched it. Captain Phil Trent with the South Bend Police Department says it is a normal response. “When this occurs people are severely traumatized, and it takes a while for them, if ever, to feel completely comfortable in that residence again,” said Trent.

The woman’s husband was called home from work a short time later, and detectives have continued to investigate the crime since then.

If you have any information about this crime, the South Bend Police Department asks for your help by calling Crime Stoppers anonymously.