Tips on avoiding Thanksgiving fires in the kitchen 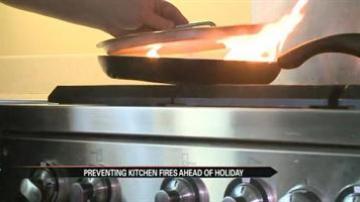 MISHAWAKA, Ind.-- According to the National Fire Data there is an average of 2,000 fires every Thanksgiving day from cooking-related accidents. Local firefighters in Michiana are asking residents to stop using turkey fryers and be careful when using the stove top.

Penn Township firefighters said if a grease fire erupts, it's best to smother the fire by putting a lid on the pan.

Brian Kazmierzak said, “People will see the grease fire, they’ll throw a towel on it, and it just spreads the fire or spreads the grease.”

Many people think you should throw baking soda on top of the grease, but firefighters said that can make the grease splatter and spread the fire.

With small children or family members in the kitchen, it's smart to keep pots and pans on the backburners.

Kazmierzak said, “Keep your pot handles turned in, and keep your kids away from the stove and cooking area. We’ve seen a lot of scald injuries where kids have grabbed the pan off the stove and poured it down on themselves.”

Nationwide firefighters see a spike in fires during the holidays. If food is on fire in your oven, don't open it.

Kazmierzak said,“ Turn off your oven and keep the door closed. The worst thing you can do is open up the door. A lot of people get distracted because they are talking to family and friends and don’t watch where their knife is going."