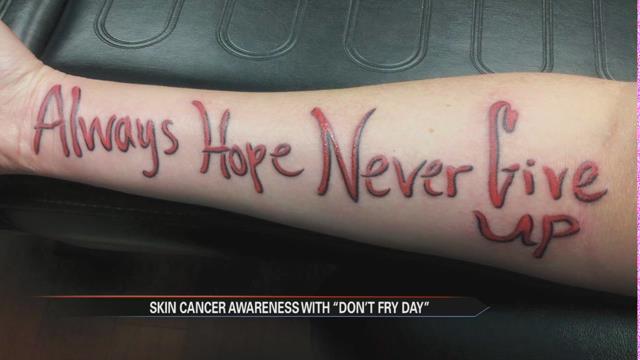 Today is recognized as "Don't Fry Friday." This weekend marks the beginning of many weekends filled with outdoor activities. The American Cancer Society along with the National Council on Skin Cancer Prevention are designating the Friday before Memorial Day as the day to raise awareness about sun exposure.

Skin cancer is the most common of all cancers. According to the ACS, more than 3.5 million cases of non-melanoma skin cancer are diagnosed each year in the U.S. It is estimated that more than 73,000 cases of melanoma will be diagnosed in 2015.

Most all skin cancers can be treated if they are found early enough so the best way to protect yourself is by getting a routine check-up.

That's what happened with Heather Cavanaugh's mother, Diana; however, it was a little too late.

“My mom passed away a year ago in 2014 from cancer. She had melanoma,” Cavanaugh said.

Diana went for a free screening in 2012 and shortly after found out she had a mole that needed to be removed. She waited a couple months to get the mole removed and by then the cancer had already started to spread.

“We didn't think it was anything serious because you know a mole can just be removed. They did several surgeries to take the cancer out. They took the mole off but the cancer just continued to spread and finally it went to her brain,” she added.

Throughout the time her 57-year-old mother had cancer, she realized just how important it is to get regular check-ups.

“People don't realize how serious it is. The biggest thing to know is that early detection is so important. I really just want to stress how important it is to get your moles checked and just not to wait because it could cost a life, this time it did.”

While her mother was in the hospital, she had her write down what she would always say, which was "always hope, never give up."

That quote is now tattooed on Cavanaugh's arm and serves as a daily reminder of her mother. "It's something that will always be with me," she said of the tattoo.

She recalled that her mother regularly wore sunscreen. The mole was also on her back in a place that was typically covered.

Skin cancer can also be hereditary and she said she's already found a spot on her leg and had it removed; however it was benign.

She remembered that the weeks before her mother passed that she was full of life and more care-free than she had ever been.

"My mom looked at cancer and was like, 'I don't care what the diagnosis is I'm going to live to the fullest and I'm going to do what I want to and not be down and out about it,'" she said of her mother.

That also reminds her to make the most of each day.

"It's so important to live to the fullest. Every single day that we're given is a gift and take care of yourself as best as you can."

Janet Wartman works for the American Cancer Society and is no stranger to melanoma.

Since then she has had melanoma two other times.

"I just went to the doctor and he said, 'what's this mole on your back?' I said I don't know, I don't look at my back," Wartman recalled.

She described the mole as, "It was black and raised. It wasn't a round mole, it was jagged."

The doctor told her they would take a biopsy of that mole on her back. She got a call two days later and they told her, "we need to schedule surgery, you have stage four cancer."

She went in for surgery for what should have been an hour and half procedure.

"When they started to remove it, they found a tumor underneath the Melanoma and it was attached to my spine. The surgery turned into 11.5 hours and I woke up completely paralyzed. I couldn't walk or do anything for myself. It was devastating. It was very difficult, I had three small children," Wartman said.

She had to use a wheelchair for a year and half after that and then advanced to a walker for another year after that.

However, she is able to walk again and also work. It was a long road to recovery and she has had melanoma two more times; however, they were not as severe as the first time.

She has worked for the ACS for 15 years now and advises everyone to pay attention to any changing spots on their body.

“Look for any kind of skin features that change whatsoever. Everybody, whether you've had cancer or not should be checking your skin all the time for anything.”

The American Cancer Society has four main tips for people heading outdoors:
1. Protect yourself with clothing.
2. Wear sunscreen with a protection of SPF 15 or greater.
3. Wear a wide brimmed hat to protect your face.
4. Wear sunglasses to protect your eyes and other sensitive parts of your face.