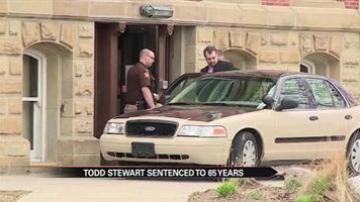 In 2012, Stewart shot Miller multiple times, stuffed his body in a barrel and dumped the barrel in the St. Joseph River.

Both the Miller and Stewart families were in the courtroom Thursday morning for the sentencing.

"Todd wanted his glory and well Todd’s got his glory. His glory is going to be 65 years in prison," said Sheila Miller, Mark Miller's mother.

In court, Judge Shewmaker used words like “frightening” and “unnecessarily brutal” when he described the day Stewart killed Miller.

When Judge Shewmaker asked him if he had anything to say to the court, he said no.

Mellisa Martin, Mark Miller’s ex-wife, says she was not expecting Stewart to apologize.

"This is his thing. If he apologizes, that makes him less of a person he is not as big and powerful as he feels, so to say," said Martin.

For now, the Miller family is focusing on healing.

"I want to go fishing with my real dad," said Jaiden.

"Ultimately, Todd chose to do what he did and that had a domino effect on other people’s lives," said Martin.

"It still is doing a lot of heartache to us yet. I just hope that the rest of Todd's life is pure misery," said Shelia.

The judge gave Stewart 30 days to submit a request to appeal.